Khalid Saleh`s company (Invesp) and he have helped hundreds of well-established brands and fast-growing startups increase their online sales through AB testing.

He shares his thoughts and observations abt marketing and business strategy in conferences around the world such as SMX, PubCon, Shop.org, Internet Retailer, DigiMarcon, and others.

He has spoken about in conferences around the world abt marketing, strategy, experimentation programs, and customer experience.

You can buy my book from Amazon:https://www.invespcro.com/cro-book

How a software architect became obsessed with marketing?

He has seen tiny startups that stumbled into fantastic success with marketing.

He has also seen large marketing departments with millions of dollars fail.

In 2005, he was a software architect helping a Fortune 500 company to build an ecommerce site.

The site came with a “small” price tag of 35-million-dollars.

They launched the site, and visitors piled in.

But in four weeks, they generated a measly ten orders.

Some people lost their job.

He figured that he could help companies avoid such catastrophic failure.

In 2006, he co-founded one of the first dedicated conversion rate optimization agencies.

And his marketing journey started.

These rates tell a story.

Marketers don’t understand why consumers hire a product and fire another.

Marketers tell businesses that “customer-centricity” is the secret to achieving growth.

Such as an essential concept that becomes nothing more than a buzzword.

Many marketers struggle to convert these concepts into real campaigns.

So, these ideas remain as theories spoken about in conferences and written about in books.

They have little to do with reality.

Why is successful marketing difficult?

Because deciphering the human algorithm is complicated, frustrating at times, and fascinating.

Learn more about Khalid Saleh on the following resources: 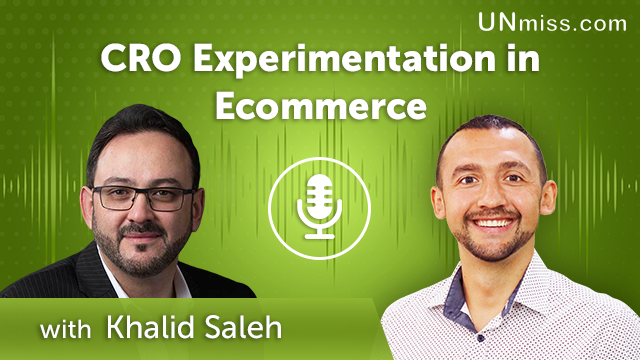 58. How To Improve CRO (Conversion Rate Optimization) with Khalid Saleh